It is not a secret that I admire the work of Karl Popper, both as a philosopher but also as a very precise historian that tried to dismiss many misunderstandings of the past.

I was reading the book The World of Parmenides, which is a collection of Popper’s essays on the Presocratic Enlightenment, and found a very interesting insight on how the epistemology of Xenophanes led naturally to a professional ethics. This link isn’t widespread nowadays, but it certainly deserves more divulgation as it is a natural consequence of the conjectural knowledge we possess.

The main point that Popper claims is that many contributions from Xenophanes were basically either attributed to somebody else, partly forgotten or even misunderstood. In his essay, he tries to make historical justice to the work of Xenophanes. It seems that ideas from Xenophanes weren’t respected mostly because of his lack of a “transcendentalism”, where many authors attempted to impress people by the depth of ideas making it look like they were non-empirically inspired (i.e. divine inspiration), possessing a prophetic significance. Something that Xenophanes avoided, because he was aware of the limitation of his ideas. Xenophanes wasn’t speaking to us as a man conscious of his superior wisdom, and that’s why Popper believed it was one of the main reasons why German scholars and also Greek philosophers were not impressed by him.

Popper argues that it was one of Xenophanes’ greatest achievements that he had shown and also anticipated almost all the main ideas of the European Enlightenment, such as: fighting against obscurity, talking and writing lucidly and modestly, practicing irony and self-irony, avoiding the pose of a “deep thinker”, being critical to society and looking the world with wonder and as Popper mentions, an “infectious curiosity”.

I will not enter into many of the achievements from Xenophanes, if you’re interested please read the essays from Popper, they’re a really interesting perspective on the history of his thought.

The central idea of Karl Popper’s philosophy is that our knowledge is conjectural, and this insight that is crystal clear today, was not before. That central idea led Popper to develop an entire Philosophy of Science, and that precise idea can also be found on some verses from Xenophanes from 2.500 years ago, that survived through third-party accounts of his work. According to Popper, there is nothing in the whole literature of philosophy that is so critical than these verses below:

“But as for certain truth, no man has known it,
Nor will he know it; neither of the gods
Nor yet of all the things of which I speak.
And even if by chance he were to utter
The perfect truth, he would himself not know it;
For all is but a woven web of guesses.”

Source: Xenophanes, translation by Popper, Sir Karl R.
“The World of Parmenides.”, B34.

These short verses, according to Popper, contain more than just a theory of conjectural character of human knowledge, but also a theory of objective knowledge. What Xenophanes is saying here is that even if I say something is true, neither I nor anybody will be able to know that it is true. And that carries also the idea that the truth is objective, that the truth is the correspondence with the facts independently whether I know or not if that correspondence holds. It also has a clue about the difference between what is certainty and truth. Xenophanes is not a pessimist though, as he also says that “through seeking they may get to know things better”, realizing that we can get closer and closer to the truth, a progress. These verses are remarkable, and they were misunderstood and underappreciated for an impressively long time. 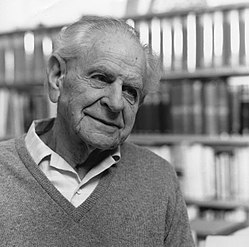 Now, Karl Popper ended up realizing this conjectural character of the knowledge after the work of Newton and Einstein, where Newton’s theory was shattered by Einstein’s discovery of an alternative theory that explains the facts at least as well as Newton’s and in other cases even better than Newton’s. Popper was already aware of this idea about the conjectural knowledge before reading Xenophanes, hence probably the reason why he understood the message, but then he questioned himself on how Xenophanes could have become aware of this 2.500 years ago ? Popper gives a theory that this was probably due to the critical nature of Xenophanes philosophy, especially regarding his critic of the anthropomorphic Homeric gods. I’ll leave here an important quote from Karl Popper regarding the work of Xenophanes:

The realization that Xenophanes had anticipated by 2,500 years my theory of knowledge taught me to be modest. But the importance of intellectual modesty too had been anticipated as long ago, by both Xenophanes and Socrates.

This is a true lesson on intellectual modesty by great thinkers, and it is not a modesty for the sake of it, it is a modesty that is backed by the realization of the conjectural knowledge and acceptance of limitations.

In this context, Karl Popper proposed twelve principles that he called a new professional ethics, closely connected to the demand for toleration and intellectual honesty.

Popper devised three main principles for any rational discussion (excerpt from “The World of Parmenides”):

The principle of fallibility: Perhaps I am wrong and perhaps you are right; but, of course, we may both be wrong.

The principle of rational discussion: We need to test critically and, of course, as impersonally as possible the various (criticizable) theories that are in dispute.

The principle of approximation to truth. We can nearly always come closer to the truth with the help of such critical discussions; and we can nearly always improve our understanding, even in cases where we do not reach agreement.

These principles are not only epistemological, but also ethical at same time, and from these principles, Popper was also able to devise an entire new professional ethics. He compared and caricatured the old professional ethics, that are in my personal opinion plaguing today as well our modern science and professional environments. The old ethics is based the idea of the personal knowledge, of being able to reach certainty, leading to the most problematic perspective we have today, the perspective of authority in science. This old imperative in science and in many professions was backed by the idea of “Be an authority ! Know everything (in your chosen field of expertise) !“. The old ethics, according to Popper, leaves no room for mistakes, it is intolerant and leads, especially in medicine and politics to the covering up of mistakes for the sake of authority.

During the recent pandemic, we were able to witness this old ethics around everywhere, where many people claimed to listen to epidemiologists “authority” instead of being critical, with many epidemiologists doing mistakes, and even Nobel laureates doing predictions that came later to be known as false. We were able also to see how pervasive this old ethic was also in politics, with many politicians trying to cover up their mistakes instead of assuming them.

Popper devised twelve interesting principles for professional ethics, that are backed in contrast by the ideas of objective knowledge and uncertain knowledge, that I’ll cite here one by one as I feel these are much-needed ethical principles nowadays:

As we can see, by accepting our conjectural knowledge we naturally end up devising ethics for tolerance, for self-criticism, intellectual honesty, and the much-needed criticism from others, especially from different cultural atmosphere, as it is upon divergence that we grow knowledge. It is unfortunate that these principles are not well adopted and widespread nowadays, and it seems that Xenophanes continues to be misunderstood and forgotten even after more than 2500 years.

Hope you liked the article,