It is not a secret that I admire the work of Karl Popper, both as a philosopher but also as a very precise historian that tried to dismiss many misunderstandings of the past.

I was reading the book The World of Parmenides, which is a collection of Popper’s essays on the Presocratic Enlightenment, and found a very interesting insight on how the epistemology of Xenophanes led naturally to a professional ethics. This link isn’t widespread nowadays, but it certainly deserves more divulgation as it is a natural consequence of the conjectural knowledge we possess.

END_OF_DOCUMENT_TOKEN_TO_BE_REPLACED

* This is a critical article regarding the presence of historicism in modern AI predictions for the future.

Perhaps you already read about the Technological Singularity, since it is one of the hottest predictions for the future (there is even a university with that name), especially after the past years’ development of AI, more precisely, after recent Deep Learning advancements that attracted a lot of attention (and bad journalism too). In his The Singularity is near (2005) book, Ray Kurzweil predicts that humans will transcend the “limitations of our biological bodies and brain”, stating also that “future machines will be human, even if they are not biological”. In other books, like The Age of Intelligent Machines (1990), he also predicts a new world government, computers passing Turing tests, exponential laws everywhere, and so on (not that hard to have a good recall rate with that amount of predictions right ?).

As science fiction, these predictions are pretty amazing, and many of them were very close to what happened in our “modern days” (and I also really love the works made by Arthur C. Clarke), however, there are a lot of people that are putting science clothes on what is called “futurism”, sometimes also called “future studies” or “futurology”, although as you can imagine, the last term is usually avoided due to some obvious reasons (sounds like astrology, and you don’t want to be linked to pseudo-science right ?).

In this post, I would like to talk not about the predictions. Personally, I think that these points of view are really relevant to our future, just like the serious research on ethics and moral in AI, but I would like to criticize a very particular aspect of the status of how these ideas are being diffused, and I like to make the point here very clear: I’m NOT criticizing the predictions themselves, NEITHER the importance of these predictions and different views of the future, but the status of these ideas, because it seems that there is a major comeback of a kind of historicism in this particular field that I would like to discuss.

There is a very subtle line on where it is very easy to transit from a personal prediction of historical events to a view where you pretend that these predictions have a scientific status. Some harsh critics were made in the past regarding the Technological Singularity, such as this one from Steven Pinker (2008):

(…) There is not the slightest reason to believe in a coming singularity. The fact that you can visualize a future in your imagination is not evidence that it is likely or even possible. Look at domed cities, jet-pack commuting, underwater cities, mile-high buildings, and nuclear-powered automobiles—all staples of futuristic fantasies when I was a child that have never arrived. Sheer processing power is not a pixie dust that magically solves all your problems. (…) –

Steven Pinker is criticizing here an important aspect, that it is obvious but many people usually do not understand the implication of this: the fact that you can imagine something, isn’t a reason or evidence that this is possible. Just like the ontological argument was criticized in the past by Immanuel Kant, where we have the same kind of transition.

However, what I would like to criticize here is the fact that a lot of futurists are postulating these predictions as if they have a scientific status, which is a gross misunderstanding of the scientific method that led to the development of the social historicism in the past, and that was hardly criticized by the philosopher Karl Popper in many different important works such as The Open Society and Its Enemies (1945) and on The Poverty of Historicism (1936) in the political context.

The historicism, as Popper describes, is characterized by the belief that once you have discovered the developmental laws (like the futurist exponential laws) of the history (or AI development), that would enable us to prophesy the destiny of man with a scientific status. Karl Popper found that the dangerous habit of historical prophecy, so widespread among our intellectual leaders, has various functions:

“It is always flattering to belong to the inner circle of the initiated, and to possess the unusual power of predicting the course of history. Besides, there is a tradition that intellectual leaders are gifted with such powers, and not to possess them may lead to the loss of caste. The danger, on the other hand, of their being unmasked as charlatans is very small, since they can always point out that it is certainly permissible to make less sweeping predictions; and the boundaries between these and augury are fluid.”

Recently, we were also able to witness the debate between Elon Musk and Mark Zuckerberg, where you’ll find all sort of criticism between each other, but little or no humility regarding the limits of these claims. Karl Popper mentions an important fact to consider in his The Open Society and Its Enemies book on the social context, that can also be certainly applied here as you’ll note:

(…) Such arguments may sound plausible enough. But plausibility is not a reliable guide in such matters. In fact, one should not enter into a discussion of these specious arguments before having considered the following question of method: Is it within the power of any social science to make such sweeping historical prophecies ? Can we expect to get more than the irresponsible reply of the soothsayer if we ask a man what the future has in store for mankind ?

With that said, we should always remember the importance of our future views and predictions, but we should also never forget the status of these predictions, and be always responsible for our diffusion of these claims. They aren’t scientific by any means, and we shouldn’t take them as that, especially when dangerous ideas such as urging for government regulation are being made based on these personal future prophecies.

The systematic analysis of historicism aims at something like scientific status. This book does not. Many of the opinions expressed are personal. What it owes to scientific method is largely the awareness of its limitations : it does not offer proofs where nothing can be proved, nor does it pretend to be scientific where it cannot give more than a personal point of view. It does not try to replace the old systems of philosophy by a new system. It does not try to add to all these volumes filled withwisdom, to the metaphysics of history and destiny, such as are fashionable nowadays. It rather tries to show that this prophetic wisdom is harmful, that the metaphysics of history impede the application of the piecemeal methods of science to the problems of social reform. And it further tries to show how we may become the makers of our fate when we have ceased to pose as its prophets.

There is a portuguese version of this post here.

I am a big fan of the Karl Popper’s philosophy of science, so I decided to write something about what I find interesting in his philosophy, especially in relation to rational criticism, to talk later a little bit of what I think about this in relation to Evolutionary Algorithms (EAs). 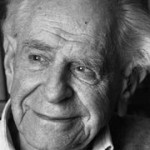 Popper, in his book “In Search of a Better World” (the original title is “Auf der Suche nach einer besseren Welt“), cites the importance of rational criticism in science and combat the dogmatism of belief in the scientific authority. For me, this idea, despite intrinsic in the thoughts of many philosophers, was not so clearly exposed as Popper did, the clarity with how Popper gives us the insight about how the science grows and improves through rational criticism is remarkable, and I’ll try to summarize here what he tried to explain for almost whole life.